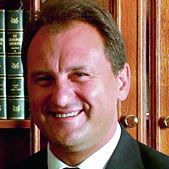 Aleksandar Vlahovic is the President of Serbian Association of Economists. He assumed that position in 2011. He is also the President and Owner of the investment consulting company AV Holding and audit company UHY Revizija. He is a member of the Management Board of Erste Bank in Serbia, Vienna Economic Forum in Vienna, Junior Achievement Serbia, as well as a member of the Advisory Board of the Southeast Business Development Network based in Vienna. He is a special advisor to the Executive Board of Wiener Städtische Insurance in Serbia, as well as the Chairman of the Audit Committee of Wiener Städtische life insurance in Montenegro.

He started his business career in 1987 at the Institute of Economics. In 1994 he joined  Deloitte Touche in Belgrade. From 1998 to 2000, Mr. Vlahović was a senior partner in Deloitte Touche Central Europe, as well as the Office Managing Partner DT for the countries of the former Yugoslavia and the Lead Valuation Partner for the Balkan countries.

From January 2001 to March 2004 Mr. Vlahovic was the Minister of the Economy and Privatization in the first democratic government of Serbia, appointed by the Prime Minister Zoran Djindjic. During his term of office, numerous important reform statutes were prepared and adopted, of which the principal ones were the Privatization Law, as well as Law on Business Registration and Company Law.

From April 2004 to May 2012 he was a member of Serbian Parliament, elected on the list of Democratic Party. He was a member and the President of the Committee for International Economic Cooperation, member of the Finance Committe and the Head of the Serbian Delegation to the Parliamentary Assembly of the Black Sea Economic Cooperation (PA BSEC) as well as the President  of the friendship group with Japan.

In September 2004, Mr. Vlahovic founded EKI Investment, an investment consulting company. After the sale of EKI Investment in 2011, he continued his career as the owner and President of the Board of the Institute of Economics until 2014.

He graduated from the Faculty of Economics in Belgrade (1987). He is fluent in English and Russian. Mr. Vlahovic is married, he is the father of two sons and the grandfather of three grandchildren.

Serbian Association of Economists is a non-governmental and non-profit association of Serbian economists founded in 1947 with the aim of pursuing goals in the field of advancement of economic science and practice in Serbia. It brings together prominent economists from academic and business circles, as well as the most important companies from the real and financial sectors.
Quick links
Contact Information
SERBIAN ASSOCIATION OF ECONOMISTS
Bulevar Mihajla Pupina 147/3, 11070 New Belgrade
Dobrinjska 11, 11000 Belgrade
Tax Identification No SR101668038
Phone: +381 11 3613-409; 2644-980
Fax: +381 11 3629-689
E-mail: office@ses.org.rs